Blog » War Horse is at the New Theatre until 7th September!

War Horse is at the New Theatre until 7th September! 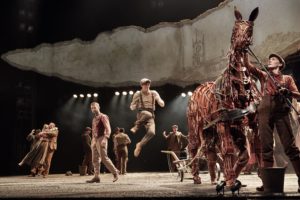 War Horse has returned to the New Theatre until Saturday 7th September 2019 – and my friend and I were invited along to one of the opening performances to review it for Mumbler. Of course, we jumped at the chance to go ‘out out’ of an evening! I’d seen it before many years ago and knew how good it was, though it had been such a long time I’d forgotten most of the story…

War Horse is an adaptation of ‘Michael Morpurgo’s remarkable story of courage, loyalty and friendship.’ It’s about a teenage boy called Albert and his horse Joey – who have an unbreakable bond which ends up taking them both to the front line of World War I. 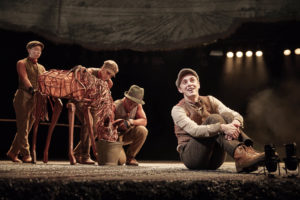 The standout thing about the show is the puppetry. As an adult horse, Joey is brought to life by three puppeteers and it’s absolutely incredible. The puppet horse stands, moves, breathes, even flicks his ears, like a real horse. It’s impossible to remember while you’re watching that Joey isn’t a real horse – it’s so believable and a joy to behold. 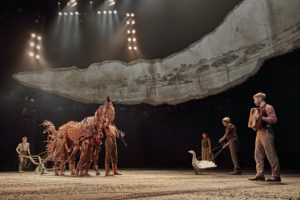 But beyond the puppetry, the story is really moving. The love between Albert and Joey is really powerful and I found myself really caring for them and wanting them to be able to stay together – and I say that as very much not  an animal lover! 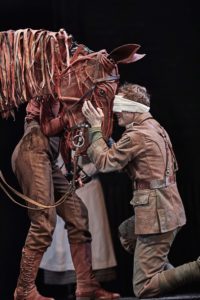 It also brings home the horror and terror of war and what it must have been like for soldiers on the front line. This hit me so much harder this time round. As a mother of two boys, thinking how it must have felt to have your sons called up to war. 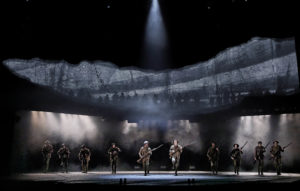 But it’s not all sombre – there are plenty of funny moments – and the story is beautifully told, with a large cast, on a stripped back stage. There’s a huge screen across the top of the stage which is cleverly used throughout the performance to help set the scene – for example, with sketches of Albert riding Joey, letters home, and poppies. 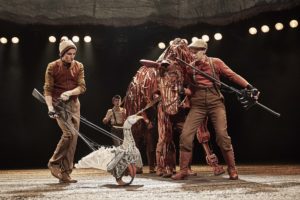 This show is absolutely amazing – when we went there was even a standing ovation!  It’s definitely a must-see.

AGE GUIDANCE – there were some children in the audience, the youngest I spotted must have been about 8. I definitely wouldn’t take my young children to see it because of the duration (a couple of hours) and the story would be too difficult to follow. I think they’d love the puppetry though, so will take them when they’re older!

War Horse, which has been seen by over seven million people worldwide, completed its record-breaking eight year London run at the New London Theatre in March 2016. It has won 25 awards including the Tony Award for Best Play on Broadway.

War Horse received its world premiere on 9 October 2007 at the National Theatre, where it played for two seasons before opening at the New London Theatre in March 2009. Since then, the production has been seen in 97 cities in 10 countries, including productions on Broadway, in Toronto and Berlin, with touring productions in the UK and Ireland, North America, the Netherlands, Belgium and China.

Tickets can be purchased from the New Theatre box office on George Street, by ringing 0844 871 3020 or by visiting our website at www.atgtickets.com/oxford (phone and internet bookings subject to booking/transaction fee. Calls are charged at 7p per minute, plus your phone company’s access charge.).