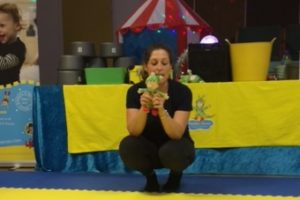 Toddler Sense classes started here in Oxford this April. They are run by Natasha, who took it on after moving to Oxfordshire…

‘A few months in, the class leader was looking for someone to join her team to run more classes as the demand was so high. I was really interested in a change of career as I was previously an Event Manager working on projects away and also for very long hours at times which wasn’t really suited to family life. Within a month I had done my training and was running classes!

‘My husband is in the military and we got a posting down to Oxfordshire so jumped at the chance to take on my own franchise. I worked for Ali at Baby Sensory Oxford & Thame for several months before opening Toddler Sense Oxford & Thame at the end of April this year.

Seeing the toddlers’ enjoyment and development over the term of classes is just amazing and is the best job satisfaction. It works brilliantly with family life and we all get involved with it on a daily basis from my husband helping me set up and sort equipment to my daughter being my little helper and practicing activities with her – I am so lucky to call it my job!’

Toddler Sense has a new class at Bullingdon Community Association (near Hollow Way) and Natasha asked me along with my little boy to review it. I’d been wanting to try out Toddler Sense since it started at its first venue in Little Milton earlier this year, and so was delighted to go along.

There are two sessions at Bullingdon Community Association – 13 months to 1 year 8 months and then 1 year 8 months to 3 years. The ages are divided up so that the activities can be more tailored to the children’s stages. We went to the older one as my son has just this week turned three.

We arrived more or less on time, but the session was in full swing with kids enjoying themselves. The room was set up with a bouncy castle and inflatable slide, tents, tunnel, balance beams, little ride on horses and soft play style squishy blocks. 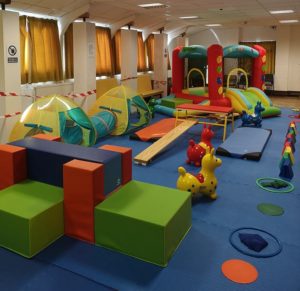 My son usually hangs back with new things, but he got stuck straight in which was so nice to see! I think it’s because everything there is toddler size, it’s all set up in an interesting way and there’s just the right amount of things to clamber on. 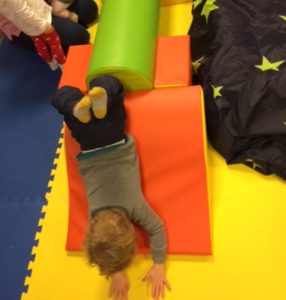 Natasha explained that she changes up the equipment every session so that it’s familiar to the kids, but different enough that it keeps things interesting and provides new challenges.

The first half of the one hour session is free play on this equipment. The children are then asked to tidy up to make space for the group time. Natasha played the tidy up song and all the kids and parents helped. I’m pretty sure my son thought this was a game which was a result! I’ll have to see if we can have a repeat of the tidying enthusiasm at home… (no luck so far!)

After we’d cleared all the stuff to the side, we sat in a circle and to start things off Natasha gave each child their own little ‘Tod’ – the Toddler Sense mascot – which they all seemed to love, including my son who isn’t normally a fan of soft toys. He mostly just wanted to chew his head, but still, he was happy! 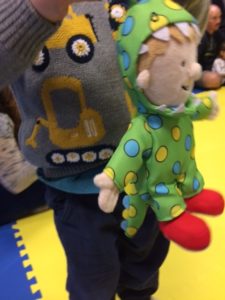 The group activities are led by Natasha and are based around a different theme every time, and this week it was good ol’ fireworks. There were so many props and so much care and effort had gone into these activities!

There was singing, dancing, musical instruments, autumn leaves, bubbles, balloons, light up magic wands… all toddlers’ favourite things, basically! Natasha even got the children to help her to make a pretend fire with (real) logs, orange scarves, LED balls. They were all into it – it was brilliant!

The grand finale was a ‘fireworks’ show in which Natasha waved ribbons and tinsel-y things, like a puppet show, over fairy lights on a board, to music. My older son was mesmerised, and I had my baby with me too. I was worried it all might get a bit much for him, but he loved it as well! 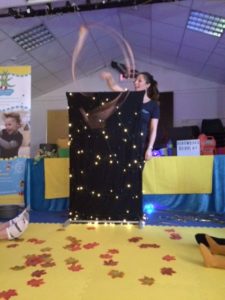 I really liked the balance of free play (on really good equipment) and group time, which I think is what makes Toddler Sense unique from other groups we’ve been to. And it worked really well to have the free play first as the toddlers had then used up enough energy to be able to sit and enjoy the group time, which is the idea behind it.

It was a really nice session and a friendly group of parents, too. And there’s a good park right next to the centre which is handy for making more of a day of it.

Classes are available Thursdays at Pine Lodge in Little Milton (13 months to 4 years 5 months) and Fridays at the Bullingdon Community Association (13 months to 3 years).

Classes are booked in terms and cost £8 each (or £12 for the Christmas party which includes lots of festive additions with treats for all and a gift for each toddler). Pay as you go slots are available for sessions that have spaces – these are £8.50.

MATERNITY COVER JOB OPPORTUNITY!
Natasha is pregnant and looking for someone to cover Toddler Sense while she is on maternity leave. There would be training and the cover would begin early next year. For more details get in touch on the Toddler Sense Facebook page.

Oxford Mumbler is your local parenting community – a website packed with information for pregnancy and for families in and around Oxford. Visit oxford.mumbler.co.uk for everything from what’s on, days out, weekly clubs and classes in Oxford, to support groups and services for pregnancy, babies, parents and more. Join the Mumbler community on our friendly Facebook chat group and follow us on Facebook and Instagram