The Story behind Little Storybeans

Does Oxfordshire really need a new children’s group? Well, yes, I think so. But I would say that, wouldn’t I?

Let me explain how Little Storybeans came into being.

My daughter loves books and stories, and has done ever since she was about a month old. One of her first words was ‘Deeshoo’ (Dear Zoo, she wanted us to read it again and again). She loved ‘Funnybones’ so much that we bought her a toy skeleton, which she called Richard and cuddled every night in bed for weeks. And ‘Room on the Broom’ led to her to instructing me to sit on a leek and pretend to be a cat, whilst she pretended to ride it in the role of a witch. 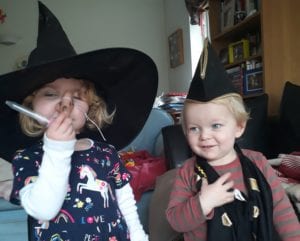 We were very pleased about this. After all, a love of books and stories can lead to an increased vocabulary, introduce children to worlds and people beyond those that they would ordinarily encounter. Stories can help children to work out emotional and practical problems by taking their inspiration from characters in stories, and can help children develop their questioning skills. However, taking my daughter to storytelling activities was not always a success.

Whereas sometimes she would sit down and listen to the book being read, at other times my daughter wanted to jump up and join in, turn the pages, become involved in the story. This didn’t worry us, we knew that it was just because she was excited by the stories. And my previous work as an early years teacher had taught me that this was common amongst small children. 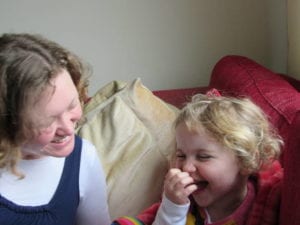 But wouldn’t it be fantastic if there was a weekly storytelling group where the stories were told in a way that meant children could become part of the story, where there were enough puppets and props for everyone to hold, where children could get up and jump around if they wanted? But also had large enough pictures, visual effects, music and story language so that the children who wanted to sit down and listen to the story could do exactly that?

This is what I aim to offer from Little Storybeans – a magical, interactive experience where children can become truly immersed in stories, whatever their temperament and mood that day.

Little Storybeans is coming soon to Littlemore, with some free trial sessions planned for July, which I am super-excited about. You can find out more about how it is progressing by liking and following Little Storybeans on Facebook, or visiting www.littlestorybeans.com