Blog » Getting my child tested for COVID-19

Getting my child tested for COVID-19

Thank you to Harrogate Mumbler for allowing us to publish this blog on our site!

Last Thursday the thing I’d been dreading happened, and from a post I saw this morning on our Facebook Chat Group, I’m not alone!  My 3 year old daughter got a temperature.  A pretty normal occurrence in a toddler life, but not in this new-normal post lockdown world.  We’re pretty good at sticking to all the rules, but like most people – we had been venturing out more.

The timing couldn’t have been worse.  On a selfish level I’d booked myself in for a long overdue pedicure, but more importantly we were meant to be going to visit my parents at the weekend.  Grandparents who had been shielding, and who we hadn’t seen for over 6 months.  And then our downgraded family holiday – we’d already had our luxury all singing abroad holiday cancelled as well as trip to Centre Parks at Easter.  But we’d managed to get a week in a little Caravan in Wales and now that wasn’t even looking likely.

There was no question.  Even if the temperature went after 12 hours (which is pretty usual for our LG) we needed to get our daughter a COVID-19 test.  We went on the website and tried to fill in the form but found it a little confusing – it wasn’t clear to me if I was meant to fill it in as me or as my daughter (its worth noting I was stressed and tired at this point so it might be a lot easier than I thought).  None the less, I called 119 and booked a test that way instead. 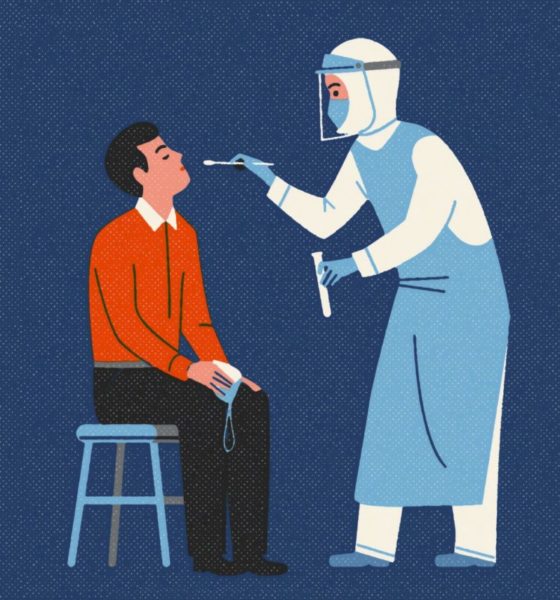 It was pretty straight forward booking the test.  It’s important to not that if you have symptoms, to get a test as soon as possible.  You need to have the test done in the first 5 days of having symptoms.  You can opt for a home test, but going to a test center is the quickest option.  We got her a test booked in for an hours time – the closest one to us was Leeds, a drive in test centre.  They’ll let you know the closest one to you – there is sometimes one in Harrogate, but otherwise its a trip to Leeds or York way – so be prepared for at least a 1 hour round trip.  You’ll need your child’s NHS number and some ID.  They’ll send you an email and text with all the details on where to go etc.

We kinda jumped in the car without thinking and made our way to the test centre.  Basically, to cut a long story short our first test was a disaster.  For children under a certain age (I think its 11) you have to administer the test for them.  We had no idea what to expect and after what seemed like hours in a steamed up car wrestling with a poorly three year old who was screaming their head off, we finally did it.  Handed it in, and went back home.  Once you have a test, the whole house hold is advised to self isolate until the test results come back (longer depending on the results).  So off we went home.  We were told we should hear back within 48 hours.

We’d postponed the trip to my parents and sat about our house waiting for the results.  I’d forgotten just how long the hours were on lockdown.  Obviously by the next morning, although still not back to her normal self she no longer had a temperature.  After 24 hours we got the test results.  Inconclusive!!!  To be honest we were half expected it.  It was an absolute nightmare trying to get the swab up my daughter’s nostril for anywhere near the advised 15 seconds (for each nostril I might add!).  So we booked another test, and went on another 1.5hour round trip to a car park in Leeds!

But this time we knew what we were dealing with.  So my advise to anyone having to go through this – go prepared!  You can’t leave your car, or even open any windows or doors.  Have hand sanitiser and tissues with you (to clean your hands), read the instructions slowly and carefully.  Look on you tube for videos before hand.  If you can take two adults with you.  You can’t leave the car – or open any windows so if you’re going solo be prepared to clamber over the seats.  The swabs are really long cotton buds – so we took a handful of cotton buds with us.  We did it to ourselves and each other – telling her it doesn’t hurt etc.  The tears still came, but not nearly as bad as they were the day before.

We also took a handful of sweets from the treat cupboard to bribe her with.  Luckily I had a couple of toys in the cupboard (I’m one of those Mum’s whose buys birthday presents in bulk😂), so we took a little super hero toy with us.  I have to say a combination of something on the i -Pad, along with plenty of sweets and the chance to get a new super hero toy did it.  Well kind of, she still screamed and tried to wriggle, but this time we managed at least 10 seconds up each nostril!  Another top tip if your child is still in a car seat – get them out and sit them on your lap (a bit like you do when they’re having their injections).  That way they feel a bit more safe – cuddling up to you, but also theres less chance of them wriggling off!  If the swab goes anywhere other than the nostrils the test can become invalid.  So take your time,  I know it’s hard to say when they’re screaming.  The second time round we did, we were probably there for 30/40 minutes, we asked for another swab too as we didn’t think we’d got it for long enough on the first round.

Its amazing how little ones can go from screaming like their eyeballs are being ripped out of their head, to happily playing with their new super hero toy – but thats kids for you!  We had a long 48 hours wait until these tests results came back but you’ll be pleased to know they came back negative.  By this time she was back to her normal self, so we managed to get down to see the Grandparents (albeit a lot shorter trip than planned) and got our week in Wales!  I’m still waiting for that pedicure though…

*Disclaimer* I’m by no means a medical expert.  This is just my account of getting my child tested and tips I think might come in useful for other parents having to go through the same thing.  We advise anyone who develops symptoms to get tested and if you are at all worried seek medical attention urgently.  To book a test and more details on COVID-19 please visit the NHS website.